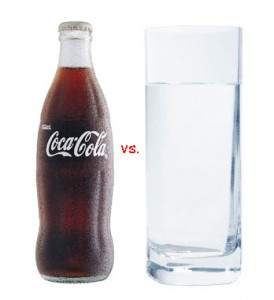 I LOVE Coke.  I often use Caffeine so that I can stay up later, have more energy and get more stuff done.   However, I know Soda is Bad for me.  Recent stress and workload had me at an all time high for Coke consumption. Not to mention I’ve begun to pack on the pounds.   So I decided to give up Soda for Lent.  I had never given up anything for lent before. But I am proud to say I managed to resist all temptations for Soda during Lent.   I did learn that Sunday’s don’t count in the 40 days of Lent, so you can actually have the item you gave up for Lent on Sunday, but again, I am proud to say I didn’t even do that.

I did substitute with a few Sweet Teas, although I have tried to resist those as much as possible. And I’ve also drank pure and flavored carbonated water, or Perrier water mixed with a little bit of fruit juice.  I also learned that Ocean Spray’s Cran-Cherry + Perrier is fairly close to a Dr. Pepper!

Easter has come and gone, and Lent has passed.  I actually feel better not drinking Coke and have lost about 5 lbs.  I’ve had only one Coke since Easter.  I enjoyed it, although I didn’t go overboard with it. (Just one 12 oz cup and didn’t refill my glass).

A dear friend shared with me a document titled “Coke vs. Water” and it was enough to give me a little encouragement to continue my resistance of soda.  I wanted to share that document here:

For those who watch what they eat and drink, this is really an eye-opener.  We all know that water is important, but we’ve never seen it written down like this before.

And now for the properties of Coke:

Now the question is, would you rather have a Coke or a glass of water?